“Plant a radish, get a radish, not a brussel sprout. That’s what I like vegetables. You know what they’re about.” That’s a line from “The Fantasticks.” It’s a charming little musical, that played off- Broadway, in New York City, for many years. The whole point of this number is two fathers compare raising children to planting vegetables. They think there are no surprises with either process.

In the play, one father has a son. The other, a daughter. Their philosophy? You raise a boy one way and a girl in another manner. You plant a vegetable and there are no variations. We all know that’s not necessarily true.

Children and plants surprise us all the time. My guys have surprised me along the way. That’s the wonder and joy of raising them.

I’ve been in my garden books all weekend. You’ll notice the cilantro from yesterday’s post is in a jar. (Or did you?) Not from my garden. Not in my many pots.

Last summer I bought a little cilantro plant. When you buy cilantro at the market, it comes in fairly large bunches. When we’re working with cilantro, we only use a small amount at a time. We got a cilantro plant and used it all summer.

We’re not in a zone where cilantro can stay outside for the cold-weather season. We put it in a pot and brought it inside. We used it through the fall. Mid- winter it wasn’t looking so great. In order to put some energy back into the plant, we cut it all back. We had a 3-bean chili with the cilantro and hoped for the best.

In March, there was some new growth. We’re always happy when that happens.The plant that looked like it was finished — was making a comeback. Children and plants are resilient. Sometimes, more than we give them credit for. 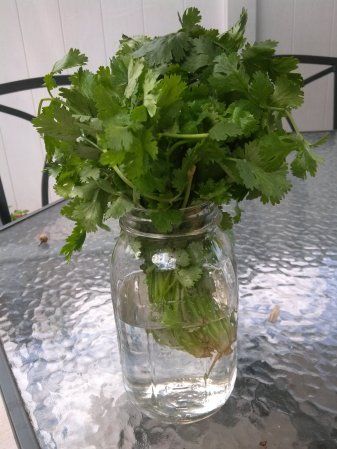 Last week, the plant looked healthy. The first grade had taken a trip to see Skippy Jon Jones. There’s a group in the play that call themselves Los Chimichangas. That’s what we made for dinner. The chimichangas were sprinkled with our newly lush cilantro.

The guys didn’t like the flavor and started picking the garnish off the top. The herb was now the most potent flat leaf parsley. We don’t use parsley. It’s not an herb any of us really like. That’s why we don’t grow it. What happened?

We’re hoping to find an answer in our garden books.

See you tomorrow for week three of the blogathon!